Gloria Dei has global partners in Guatemala through companionships with the Catholic Mission at San Lucas Tolimán, and the Iglesia Luterana Agustina de Guatemala (ILAG). The congregation also supports a staff person in the Iringa Diocese of the Lutheran Church in Tanzania (ELCT).

Companionship & Accompaniment
Gloria Dei’s global companionships center around the spirit of accompaniment – “Walking together in a solidarity that practices mutuality and interdependence in mission.” With our Lutheran companions at the Iglesia Luterana Agustina de Guatemala (ILAG) and our Catholic ones in San Lucas Tolimán, we uphold the values of mutuality, inclusivity, vulnerability, empowerment, and sustainability. Unlike traditional “mission trips,” visits to our companion partners encourage the common goal of building relationships with our family in Christ.

Learn more about accompaniment through this ELCA study guide.

About the Catholic Mission at San Lucas Tolimán
The San Lucas Mission was originally founded as by the Franciscan order in the late 16th Century with the building of the Mission Church around 1584. In 1963, in response to the Catholic Church in Rome’s call for deeper involvement in world missions, Fr. Greg Shaffer from the archdiocese of New Ulm, MN went to San Lucas Tolimán to begin work as a parish priest.
The focus at the San Lucas Mission has been to respond to the expressed felt needs of the people, working to build the infrastructure so that the people might grow out of the process of poverty. Socio-economic programming at the mission is based in Christian Social Doctrine and is designed to develop five basic human rights: food security, shelter, healthcare, education and work.
Gloria Dei has had a 20-year partnership with the Catholic Mission at San Lucas Tolimán. Delegations have helped in dental clinics, constructed the women’s center, built fuel-efficient stoves, nourished seedlings for reforestation, and much more.

About Traveling
Once a year, a delegation from Gloria Dei travels to Guatemala to visit our companions. A typical trip is one week long, with time being spent with in Guatemala City with the ILAG as well as at the Catholic mission in San Lucas Tolimán. If you are interested in traveling, please contact Julie Marcotte.

About Bega Kwa Bega in Tanzania
Bega Kwa Bega is the name of our synod's companion relationship with Iringa Diocese of the Evangelical Lutheran Church in Tanzania (ELCT). Bega Kwa Bega-"shoulder to shoulder" in Swahili-describes the accompaniment model of work being done in the spirit of mutuality, inclusivity and vulnerability. It also is the umbrella name in which a variety of programs are carried out.

Bega Kwa Bega was officially begun in 1987 as a synod to synod program with the primary focus on educating pastors in the rapidly growing Evangelical Lutheran Church in Tanzania. In 2000, companion relationships were developed. Evolving out of a grassroots movement, congregations in the Saint Paul Diocese are matched with congregations in the Iringa Diocese, making possible mutual efforts and creative initiatives which flow out of the vitality of the relationships established over the years. It now includes some 66 congregations and a variety of affiliated ministries that address needs.
In 2019, seven members from Gloria Dei went to Tanzania to learn and experience many of the programs/projects of the Iringa Diocese. They also were hosted by Kalingapasi parish. The vitality and strengths of this congregation made a lasting impression and deepened the faith of those from Gloria Dei. After they returned, Kalingapasi sent an invite to join with them as partners within Bega Kwa Bega. Gloria Dei council and the congregation supported this partnership and covenants have been signed by both Gloria Dei and Kalingapasi. We are in the process of building a relationship wherein both will extend Christian hospitality and strengthen one another through the shared practice of prayer, presence and projects.

Members of Gloria Dei are in Guatemala visiting our mission partners at San Lucas Mission and the Iglesia Luterana Agustina de Guatemala. 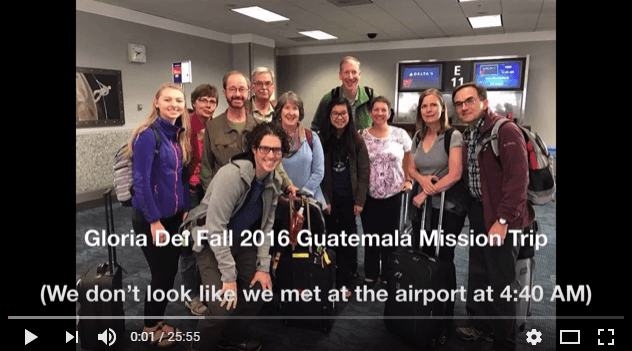 View our trip video from October 2016. A team of GDLC friends traveled to Guatemala during Day of the Dead and All Saint’s Day.

Come and see what our Lutheran and Catholic partnerships look like. We hope you join us on a trip soon!