At the risk of saying something controversial and divisive, I wish we had a screen to show images in worship. Seriously, I do. Because I have the perfect picture for today’s first reading[i]. I shared it last summer with the kids during Let the Children Come, but that small piece of paper print just didn’t do it justice.

It’s a before and after photo of one of those Super Blooms from California last spring[ii]. The first one shows a landscape of utter death and desolation. After eight years of drought and rising temperatures, the desert of central California was dried out and hopeless. But after that long rainless stretch, California was surprised by one of the wettest winters on record last year, record rainfalls, record snowfall totals. Ski runs stayed open until July. The parched deserts and dry lands were flooded with unprecedented moisture. 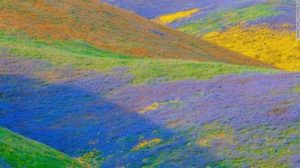 All those long-buried seeds and dormant grasses woke up to one of the most magnificent springs in memory. Astronauts from as high as the Space shuttle reported seeing the colorful carpet of the central valley from orbit[iii]. Tourists marched through a wilderness now sparkling with life, like pilgrims parading to freedom. If I could show you a picture of it right now, it would take your breath away[iv].

I wonder if Isaiah’s song took away the breath of his friends. Though they were still detained in Babylon after years of oppression and captivity, Isaiah paints a picture of their return to Jerusalem. Even the pathway home will not take them through a desolate, forsaken desert, but the road itself will blossom. “The burning sand shall become a pool,” he sings, “and the thirsty ground springs of water.” A highway will burst into joy like a Super Bloom in the Central Valley, and God’s people will return to their home.

It had been 70 years of captivity for the people of Jerusalem, long enough for generations to grow up without ever having seen or imagined the wildflowers or the desert paths. The survivors had long forgotten their way back to a place where God’s justice and compassion were apparent, where people were no longer blind to the truth of God’s love, were not kept from singing God’s joy. I wonder if Isaiah’s message turned them from the despair and hopelessness they faced in Babylon and breathed new life into their stories.

Can people living in drought ever really imagine a Super Bloom in the desert? It seems like nearly a decade of scorching heat and lack of rain would leave even hopeful people feeling discouraged and cynical. Can you hope for a Holy Way opening through the wilderness when for generations you’ve been kept from worshiping freely, earning a fair wage, or living out your dreams? Can you still picture a homeland when every door has been slammed in your face for 70 years?

It doesn’t take me that long to lose hope. My knees grow feeble in mere moments at the news of loss or conflict. Someone mentions a job loss, and my voice begins to tremble. A text message reports a terrible diagnosis, a blog post describes ominous reports of marriages no longer intact, of students no longer thriving, of life not seeming worthwhile—and my stomach turns queasy.

I know that for some of you, this year has brought too much loss or depression. The empty place at the table or the lack of happy outcomes induces pain that seems relentless. The last seven weeks alone have been too much for some of us to take. I’ve been switching my car radio from the news channel to classical music to help calm my nerves.

We don’t know how long John the Baptist has been in prison when he began to falter. The fire and wrath he described at the beginning seem to be burning in the wrong direction. It wasn’t the brood of vipers that lost their skins or changed their ways. Rather John, the prophetic voice for change and renewal himself, is sitting in prison. He doesn’t survive four more chapters in Matthew’s text.

But while he’s still alive, John sends a last-ditch plea to Jesus: Are you the one? Are you the way we get out of this pain and this drought? Are you the storm that floods the brokenness with new life? Things are plain dried up around us. The desert of tyrants has choked the hopes of the immigrant; the famines of injustice and bigotry have imprisoned our confidence.

At first, Jesus’s response seems dismissive of John’s situation. “Sure, you’re in prison,” Jesus seems to imply, “but remember some people have had good things happen to them. I’ve been doing some good. A few people have been healed. It’s not all bad.” I don’t know about you, but if my life were headed to the chopping plate, I’m not sure I’d be all that reassured to know that Jesus was able to help some people, just not me.

But is that what Jesus means? Jesus quotes the ancient prophet who sang to people who had forgotten hope. Isaiah was reminding his friends of the truth that seemed impossible to believe: God has not forgotten us.

In spite of the terrors and losses and pain we have had to endure, in spite of generations growing up and dying while we fight foreign wars, in spite of the sorrows and disappointments that seem to be part of everyday life, in spite of regimes that seem to delight in mocking those who suffer, in oppressing the least, and abusing the truth-tellers, God is with us. God sees our longing. God sees the brokenness. God is here; hidden in the desert, ready to bloom.

Jesus quotes Isaiah to remind John in prison that he has not been forgotten. This is our God: the one who creates ways in the wilderness. God is the one who empowers those whose knees have gone weak. God gives a song of joy to those without voices, and causes deserts to break forth into gardens of color and delight. God is here.

Advent invites us to imagine a God who suffers with us. December’s sunshine can’t quite break through the clouds. Night falls halfway through the afternoon. Wind robs our breath. Winter air strips the moisture from our skin, and there’s so much static electricity that we get shocked while opening the refrigerator at the grocery store.

Here at church, homeless families seek shelter from the cold. The picture of a young couple searching for a place in the night begins to come into focus. Mary labors under the weight of a child pushing to be born. Joseph fights through troubled dreams and sleepless nights to make new plans. Is God in the night? Does God wrestle against the fears and losses and worries with us? Is the Christ Child still shifting under our skin to find a way so that love and light and peace and hope can enter our lives?

Listen to the prophet’s truth: Here is your God! Not only in the water-drenched, color-soaked gardens of a Super Bloom, but hiding even in the dormant dust. Here is your God — camping out in the wilderness, opening up the voices of the powerless to sing of freedom, stirring in prison cells and immigration camps and homeless shelters, and finding a way where there is no way to be born.

Maybe God is struggling to come to birth even here, when we greet the lonely one, when we comfort those who are grieving, when we encourage those who are down-hearted, when we include the stranger, allowing God’s reign to take shape in our interactions. Advent shows us a God who not only suffers with us, but somehow brings us to life to the desert.

Now there’s something in this picture I’ve avoided discussing, and I know it. There’s disturbing news in those Super Blooms, of course. Those eight years of drought were some of the hottest and driest years on record. The snow and rain that freed the seeds to finally sprout were way beyond the normal rainy swings that can sometimes be expected. All of it points to catastrophic climate change. The amazing scope and size of the Super Bloom itself signal a growing crisis along the coast.

Yes, it’s beautiful for a few weeks, but California is then left with trying to re-convince residents to conserve water. The rest of the world’s willingness to continue burning fossil fuels only adds to future disastrous outcomes.

But I can’t help but wonder if God is even hiding signs for us within our destruction, sending us sparks of energy and light in the static, dry air, creating hope even in spite of our broken ways, using even our abuse of the creation to wake us up, tapping even an imprisoned prophet to remind us of something new happening.

After all, we are a people who trust that God can use even a dying savior to forgive and welcome, to heal and restore, to open hearts and homes and hands and minds, and to create a way where there has been no way.

Is God calling to us through the voices of young determined environmentalists who are determined to make us see the need for change?

At the risk of saying something controversial, Advent is an amazing display in the overcast skies of December. Advent presents a pathway in the night through a birth canal that leads us toward ultimate joy: Here is our God. God is with us in our broken relationships, with us in our lonely prison cells, showing us a vision of love and justice. God sees the dried up wilderness of grief and frustration and outrage in our hearts, and ignites us for beauty, generosity, and new life, even yet. The wilderness and dry land of our lives shall be made glad, the desert shall rejoice and blossom.