Spoiler alert – if you’re reading Book Six of the Harry Potter series, I’m not going to ruin the entire plot, but I am about describe an incident in Chapter 14, so you may want to cover your ears.

Harry has access to a powerful potion that will help his best friend Ron in an important Quidditch match. Of course, he knows that it’s not right to share it with Ron for a sporting event. That would be cheating. It would be offensive to the sense of fair play that Harry Potter and his friends believe in. Their dear friend Hermione pleads with Harry not to use the magic inappropriately, but she’d “never really understood what a serious business Quidditch was[i].” Harry sneaks a small sip into Ron’s Pumpkin Juice the morning of the match, and sure enough, Ron performs well beyond his normal, fumbling, overly-eager abilities.

But here’s the spoiler, Harry hadn’t actually shared anything with Ron. He had only made it look as if he may have. It didn’t matter. Ron played with unusual concentration and courage and brilliance because he believed that the Felix Felicis was helping him. But he hadn’t needed magical luck, because deep inside him, Ron really was that magnificent of a Keeper. He really was that good of a player all along.

The Harry Potter series serves as a 21st century description of an ancient truth: Goodness is stronger than evil. Harry, and his friends, and all of Dumbledore’s Army fight against forces of despair and hatred and bigotry and selfishness, with all the power of love and virtue. In the long run, we sense that regardless of how malicious and destructive the forces of wickedness may appear to us, goodness will be victorious. Love, truth, kindness, faithfulness and loyalty will win.

I think we should read the book of Revelation, and other apocalyptic literature, the way we read Tolkien or Narnia books; we should understand it to serve the way Star Wars or Stranger Things does. There are forces in the world that work to hurt and bring down people, which can lead us to despair and absolute fear. But there are stronger powers that will ultimately prove that death and fear and intolerance have no lasting power over us. Love wins. And we have been grafted into the story of love for all time.

Are angels real? Today we celebrate Michael and all the angels. We rarely do. Michael is considered the archangel, the defender of God’s people, willing to fight any force of the universe which would try to separate us from God’s love. When September 29 is a Sunday, we have the option to note Michael’s day. Some years, we don’t even bother.

We hardly ever talk about angels in sermons. But we sing about them in countless hymns, and we mention them nearly every Sunday in our liturgy. We adorn our churches with their images, portray them in our stained glass, and decorate our homes with them every Christmas.

Angels figure prominently in scripture. They descend the ladder to Jacob in his sleep, reminding him of God’s abiding presence. They announce to Sarah and Mary’s their most unusual pregnancies. They sing to the shepherds in Bethlehem, and assure the disciples that Jesus is no longer held in the grave.

Angels bring messages from God, and convince God’s people that the powers of heaven are fighting on their side. Michael figures prominently in the book of Daniel and in the book of Revelation, always in battle with forces that are trying to hurt us.

We can’t prove that angels are real. Most physicists and scientists would probably say they couldn’t be. But then again, we can’t prove that God exists either, or that any of the miracles in the bible are factual.

What if we were simply asked to live as if angels could be real? What if we were simply asked to live as if we believed there were forces outside ourselves, outside our reality, outside what we can touch and prove and measure, which were working for good in the world? Would we live differently if we believed we had been slipped a small sip of Bottled Success in our morning Pumpkin Juice? Would we stand more confidently if we could face every day knowing that we’d have the upper hand in every battle we faced, because goodness was fighting on our side? Could we endure the troubles, or sorrows and brokenness of our days with more hope if we knew that the ultimate victory of life over death was already written in the heavens, and that our names had already been included? 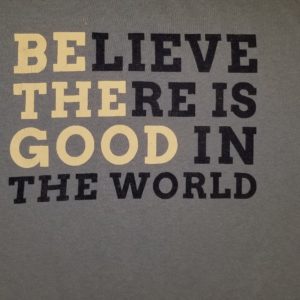 A few years ago, I noticed at staff meeting that I had a stain on my blouse, and wanted to rinse it out before my evening meeting. Katie LeClair, our magical youth ministry director, dashed off to her office and found a spare T-shirt that had been left after a mission trip. The front of the shirt encourages, “Believe there is good in the world!” but a few of the letters are highlighted, so that an inner message says even more emphatically, “Be the Good.”

It’s a great message. Believe there is good working in the world. Believe the strength of love and hope and kindness are stronger, deeper and truer than any forces of hatred or violence. And then be the good. Be the loving one, the hopeful one. Be kind and strong and deep and true. Be the good the world so desperately needs. You will not be alone. All the forces of heaven will be working beside you, and because they will, love will triumph.

This is the claim we make at Easter: Christ is risen! Death has no more dominion over you! Christ is alive, and God’s love can never be defeated for the world, or for any one of us.

There’s a wonderful verse woven into the Ten Commandments which most people dislike or ignore, but it’s actually one of my favorite bible verses[ii]. I know I’ve talked about it before, so forgive me if my preaching is too repetitive, but it’s honestly so good.

It’s a reminder that there are consequences for those of us who ignore God’s commands that can reach even to the third and fourth generation beyond the offender. We are knit together in history in such a way that when we hurt each other, we build resentment and pain and damage into relationships. Sometimes that injury lasts way beyond the present situation into the children and even the great-grandchildren of those who were harmed.

We see examples of that when we notice that the destruction caused by our country’s history of slavery and Jim Crow segregation can still be felt in our society even years after we’ve tried to put it behind us. We see it whenever family dysfunction affects the way we treat our children, and the way they, in turn, treat theirs.

But the passage goes on to assure us that the consequences of living in accordance with God’s love are even more powerful. God assures us that blessings reach one thousand generations for those who abide by God’s designs. The goodness of God’s plan for us is that though we can hurt each other, the love and respect and kindness we show one another is overwhelmingly more powerful in building trust, and hope, compassion and righteousness into the future.

Damage to the third and fourth generation, yes, but blessing for 1000 generations! Do the math!  That’s at least 20,000, maybe 40,000 years! 1000 generations is way, way longer than the biblical history of humans. Since way, way, way before Jesus, or Moses, or Abraham and Sarah, any love that was shown, any kindness, any gracious act of helpfulness, is still having ramifications of goodness in our lives today. We are still benefiting from the care humans offered each other 25,000 years ago. God’s love is woven so deeply into creation that it brings blessing into our experience today.

Maybe that goodness is the power of the angels. Maybe God’s love is already knit into the forces of good in the world that it reaches 1000 generations into history.

Madeleine L’Engle’s book, A Wrinkle in Time, was an earlier generation’s story of the forces of goodness overcoming evil. Maybe not angels, but certainly some sort of heavenly messengers, Mrs. Whatsit, Mrs. Who, and Mrs. Which remind Meg and her siblings that death has no more ultimate power over them, and that there are forces of goodness fighting on their side.

When asked about those other fighters, the Mrs.es remind the children, The light shines in the darkness, and the darkness cannot overcome it. Jesus is the light, but there have been other light-reflectors, too. The children begin to remember, Leonardo, and Michelangelo, Shakespeare, and Madame Curie, Bach, Gandhi, Euclid and Copernicus[iii]. Some of them are pictured in the windows in our sanctuary along with the angels. There are powers working for the good in every generation.

I can’t prove to you that angels are real. Sometimes I’m not even sure what I think of them myself. But then again, I can’t prove that love is real, either. I don’t know how science could prove love is anything more than an idea we tell each other is there. But I feel love. I receive it from you, and from others around me. I’m convinced that I even receive it from others who lived 1000 generations ago, and that because of them, I’m able to do loving, kind, generous things in my life today.

I can’t convince you that Michael and the angels are real, but I can see you smile at children clasping their very own copy of a book filled with descriptions of God working love and hope into history. I can see your gentleness in helping them find another story of grace, and praying that it help them find courage to shine light rather than despair. I hear your whispers to them that they already have the power of goodness deep inside him, that they all along have been able to be the good in the world, and that they, too, are really magnificent Keepers of love, even now.

Jesus cheers on the disciples who come back from their first ministry assignment, and says he saw powers of hatred fall from heaven as they worked. He assures them that love wins, that hatred and violence, fear and hostility, greed, spite and cruelty have been conquered, and that the every act of peace, hopefulness, and compassion brings blessings that will last for more than 20,000 years.

Maybe no one actually slips magic into our Pumpkin Juice, but grace, forgiveness, love and ultimate goodness is about to be poured out into a cup of wine right here. I can’t prove to you that angels are singing with us, but if you listen carefully, I think even you may hear Michael humming in your ear. Let’s sing along.

Thanks be to God. Amen