Dear Friends in Christ, God’s grace and peace be with you.  Amen.  Merry Christmas.

So, was your celebration everything you wanted it to be? I suspect maybe not. Of course, the promise of the vaccine is beyond hopeful. But we recognize even if most of the public here in the US will be vaccinated by the end of the summer, it will have come too late for far too many families. There have been somewhere around 1.7 million deaths worldwide from the virus already.

And while we wait for that vaccine, there’s still the reality about where we are. Between all of the restrictions and continued fears, the job losses and food scarcity, the lingering symptoms for some of those trying to get over the virus, as well as the brutally divisive and mean spirited political discourse, it’s been a particularly rough season to truly enjoy. Our holiday plans were reduced to smaller gatherings, shipped packages, and lots of Zoom time, and we missed the delight of worshiping together here on Christmas Eve.

A friend told me that since their family had modified their plans, they would hold a small gathering with only a few last weekend, but then spend Christmas and this weekend quietly on their own. None of it had even happened when we talked, but she was already feeling disappointed and let down. She knew that the smaller approach to the holiday was the appropriate way to go this year, but she sensed that it would leave some joys unwrapped in her heart, and she’d probably be feeling down.

I suppose we’re all singing some variation of those Christmas blues. But we knew not to anticipate what we normally would have celebrated. It helped to lower our expectations of what we would be able to do this year, and most of us tried to make the best of it.

Do you suppose Simeon and Anna’s expectations lowered that day in the temple[i]? All those years they had waited hopefully for God to show them a sign that the promises of old were going to be fulfilled, that God’s light would shine for the whole world to see, that they would be saved. They must have been waiting for a grand display of power or glory, they must have hoped for something like what the shepherds had seen, when the glory shone around them and the sky filled with angelic hosts.

I wonder if after all those years of anticipating, this ultimate revelation was a little less dramatic than they had dreamed. Could this have been the sign they had imagining all those years? A sleep-deprived, peasant couple holding a new baby, arriving in time for the mother’s purification rites and making an offering, probably not even of doves, but just a couple of pigeons? Where’s the light to the nations? where’s the redemption from tyranny? What was it that they saw in this child that finally had them say, “This is it.”

Maybe Anna and Simeon had seen enough, and realized this was all the better it was going to get. Not the shiny extravagant Christmas glistening in extra tinsel and peppermint, but the Christmas that was. A child, his relatively humble parents, and their offering. Maybe they reached the point of saying, “This child will have to do. We’re too old to hope for more. This will be the only sign God will send us.”

To the contrary, Anna has been faithful through eight decades to God’s pledge to save the people. She had prayed in the temple day and night to a God she knew did not give up. Simeon sang of the God whom Isaiah knew, the God who would come with healing to restore all creation, just as surely as the spring would follow the winter[ii]. 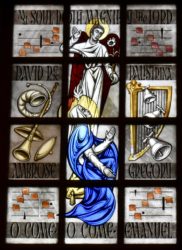 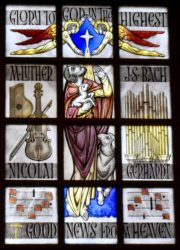 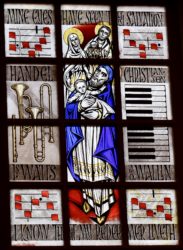 Above the organ console where Tim sits here at Gloria Dei, there is a set of three lovely stained glass windows. They celebrate the hymnody and the musicians of the church, and are centered on the songs in the first two chapters of Luke.

First is the window of Mary’s Magnificat, sung in response to the angel’s revelation to her that she would bear the chosen one. We sang her song last Sunday[iii]. The center window shows the angels singing their song of peace on earth to the shepherds in the sky over the hills near Bethlehem. Of course we sang their Glorias with them on Christmas Eve[iv].

And then there’s this beautiful window of Simeon in the temple, singing his lovely Nunc Dimittis which I just read in today’s gospel. No angel revelation or heavenly hosts comes to him and Anna. They just take the child into their own hands, and see God in him. Rather than lowering their expectations, the pair seem to go all in in trusting God’s eternal love for them. In fact, I wonder if they discover God lives up to the promises more fully than they could have ever dreamed.

Caryll Houselander, 20th century poet, artist and mystic, describes a day on which she rode an underground train through London, and became overwhelmed with the recognition that Christ was living within every other person on that train. Because Christ had been born in Jesus, it dawned on Houselander that he had been born in everyone and everything. She saw Christ particularly in those who were suffering or dying. In their loss and their hunger, she saw Christ’s pain and sorrow, too. God had been poured out into the living stuff of creation itself, the poet remembered, and she suddenly discovered God living in all the rest of creation, too.

When discussing her story in Richard Rohr’s book The Universal Christ[v] a few years ago, a group of us at Gloria Dei described her reaction as having been gob smacked. Her vision gob smacked her into seeing God’s living presence all around her. She describes the vision only lasting a few days, but it transformed her faith for the rest of her life. No longer sensing Christ as a singular person who lived 2000 years ago, she was changed to see Christ living. For if God could be born in a child in Bethlehem, she realized, then God was even now, living within every part of creation she encountered.

I wonder if this is what Anna and Simeon realized that day in the temple, too. Maybe they were gob smacked by sensing that the God of their ancestors, the God to whom the prophets witnessed, was fully alive not only in this baby, but because of him, in all creation.

Did you ever notice that the stories we take delight in at Christmas time always open up the characters to gracious, free, expansive visions of the world? Ebenezer Scrooge converts into an outrageously generous and joy-filled old man. George Bailey becomes optimistic about his ability to make a difference in the world. And The Grinch’s heart grows three sizes in discovering that Christmas came to Whoville in spite of their losses.

It’s as if the whole spirit of Christmas comes to any of us when we sense the goodness of God existing in the world, when we admit that our fears and challenges can’t stop God from being born.

I bet if you look closely enough, you too will admit that Christmas did come to you. “Somehow or other, it came just the same.[vi] Perhaps you joined the Grinch to discover, “Maybe Christmas… perhaps… means a little bit more[vii],” than we had imagined.

Here’s the gospel: Christ’s birth doesn’t need for us to have our huge family gatherings or a packed church. Instead God hears our Christmas blues and notices our reduced expectations, and surprises us by showing up anyway.

The love of God is born when any of us forgives the brokenness we’ve known in the loved one who is dying. God’s love is born when any of us smile across the screen to the family member far away, or find hope in the promise of a vaccine, give thanks for a chance to walk in the woods late in the afternoon, write letters of advocacy on behalf of those who are struggling this season, send donations to agencies that serve those who are hungry or homeless, show patience to the delivery persons or grocery clerks or hospital custodians, or smile with a child who reminds us that we are loved. God’s love is born and we are gob smacked as we sense our own hearts growing three sizes or more.

What do you know? Christ’s birth into our world isn’t hampered by a pandemic, or social distancing, or sorrow, or even death itself. Rather, we see God’s salvation prepared in the presence of all people, because God still loves the world.

It isn’t just Anna and Simeon to whom Mary and Joseph present their child today, but to all of us, born into our hands now, as bread and wine, reminding us to never lower our expectations, but to expand them, to see the real presence of God born in all of us, freeing us to praise God and make love known in the world.

Thanks be to God. Amen