In the little town of Chimayo, New Mexico, a small adobe church sits in the foothills of the Sangre de Christo Mountains.  It’s nestled within an assortment of other adobe buildings, gift stores, other chapels, a tiny museum, and religious statues. At the foot of the various altars and statues and stone archways are hundreds of candles, rosaries, and stones, tiny mementos, and offerings, left by some sojourner on behalf of a loved one.

The shrine has stood since the early 1800s, when a local friar noticed a crucifix planted in the ground. He felt it needed a place of honor, so he carried it to the church in town, a few miles away. But according to legend, by the next morning, the cross had made its way back to its spot in the mountains. The friar moved the cross two more times, and each time, found that it had returned to its home. Finally he and his friends left the crucifix in the dirt, and built a small shrine around it there.

The ground where the cross was planted had for years been considered as sacred. Native Pueblo communities had held the land in special regard because of the restorative powers of the hot springs nearby, and because the dirt itself was said to have healing properties. 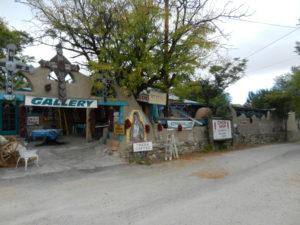 In fact, it’s called the Shrine of the Holy Dirt, one of the most visited holy pilgrimage sites in North America. Travelers come to touch the ground, to collect some dirt to take home for loved ones who are sick or suffering. The faithful touch the ground and pray for others. They leave pictures of those for whom they’ve prayed, such that the walls of most of the little chapels are covered floor to ceiling with thousands upon thousands of pictures.

I didn’t know what to make of the Chimayo Shrine when I visited this fall. It had an odd mix of kitschy tourism, with sacred prayerfulness, and offered a strangely goofy, reverent feeling. We were there with some friends, who have a slightly different feel than mine, and I didn’t want to offend or ridicule them, but I found myself both kind of mocking the chintzy, plastic relics, and curiously drawn to the power of the dirt. After all, that dirt had been on these mountains for millennia, and had been seen by someone as healing or restorative, and had brought comfort and meaning to generations of visitors for ages.

What could it all mean?

In the beginning when God created the heavens and the earth God said, “Let the dry land appear.” And it was so. God called the dry land Earth, and God saw that it was good.

When you stop to think about it, every speck of soil on the planet, not just the dust of the Sangre de Christo Mountains, but all dirt has been here since the beginning. Every morsel of dust on that mountain has given up its nutrients, has at some point offered up its minerals to help a blade of grass grow, or been blown across the dessert by a dry wind or been carried on the belly of a lizard to a new part of the desert. Every particle of dirt has undoubtedly journeyed through the life cycle consumed by bacteria and mollusks, reptiles and raptors, mountain lions and vultures, and eventually decayed back into the earth as creatures turning back into dust.

Perhaps that cycle has been repeated millions (billions?) of times, meaning that those same molecules that form the ground in Chimayo have existed since God first separated the waters from the dry lands, and called it good.

“Then God formed the human from the dust of the ground, and breathed into his nostrils the breath of life; and the human became a living being.”

God uses the dust of the ground to bring forth life, shapes each one of us from the earth’s atoms, and forms us into living, breathing beings. So if those same dust particles have been floating upon the planet for generation to generation, then maybe the dirt around Chimayo really is holy. Maybe all earth is holy, in fact.

As Pastor Bradley stated last night, all the dust of the ground is the very stardust matter with which God creates all humanity, all nature, all creation, the whole universe, and labels as good.

At Christmas this magnum mysterium is celebrated: God’s word, God’s message, God’s whole purpose and meaning, takes on flesh, puts on dust and joins us in the ground. Heaven embraces earth, Word becomes Flesh, and we perceive the glory. Those molecules, claimed by God to become flesh, now float across the planet.

Isn’t this the real miracle? We find in the incarnation that all of the dust of the planet carries God. Holy Ground. Holy Bodies. Holy Dirt.

Early in Advent, Nancy Agneberg led a forum for us on the physical nature of spiritual practices. It’s easy to think of our faith as simply a matter of the spirit, our thoughts or impressions,      what we believe in our hearts. But Nancy reminded us how all of those beliefs and impressions are of course captured in our physical bodies–in our hearts, in our brains, in our gut. We inhale air/wind/spirit/breath into our bodies, and hold it within, until we exhale. Molecules in, molecules out, always held in this physical receptacle – this fleshy body.

Nancy finished her talk by leading us in a short exercise, inviting us to stand in what she called “Mountain Space,” with feet shoulder width apart and knees slightly bent. While trees and plants may be moved by storms, and even earthquakes may shake the ground, or volcanoes rip through their sides, the mountains are still standing. Nancy reminded us to stand on the ground below our feet with the permanence and steadfastness of a mountain, held by the forces of gravity to the strength and wholeness of the earth.

God plants us here on this earth. We stand here on God’s creation, on the ground through which God has made all things. We stand, in fact, on the very dust on which Mary and Joseph walked to Bethlehem, on the very molecules which formed the hay that cradled their baby in the manger, on the very soil on which the shepherds led their flocks. It’s all right here, under our feet, Holy Ground.

Sometimes Christmas can seem so absurd.  We celebrate the birth of God in the world by putting up tired decorations. We send each other greeting cards and run around buying gifts that never seem quite right. We bake and plan and rehearse and put up trees in our houses (Honestly. What is that about?!). We travel to be with loved ones, volunteer to be with those who are lonely, and sing along with silly songs on the radio, all as the means to celebrate a mystery so profound we barely have the words to explain it.

At the worst moments, we lose the point of the season all together. We grow agitated and weary, frustrated with drivers in the wrong lane, irritated with the person in front of us at the checkout lane (who has coupons!). We brush off those around us like dirt we shake from our shoes after a walk in the slush. Sometimes treating even our loved ones like dirt.

Like those dusty, plastic trinkets and odd religious mementos at Chimayo, all of our decorations and tinsel and lights and frustrations can finally seem plainly artificial and ridiculous.

But then again, isn’t this the real miracle of Christmas? God being born into the dusty, chintzy, broken reality of our story? In spite of the glitz and the worries and the struggles to get it all done, there’s something wonderfully good and authentic about the memories and tenderness of this holiday, too. At the end, there’s something deeply healing and worthwhile about hearing from those we’ve lost track of, and holding loved ones after long absences. There’s something so restorative about feeding our bodies with sweet things, singing in harmony with those around us, trying hard to find gifts the capture our feelings, and always being truly, madly, deeply, so very, very human.

In one of the small side chapels at Chimayo, rather than photographs covering the adobe, countless tiny pairs of baby shoes are affixed to the walls, floor to ceiling, little dress patent leather, and moccasins, and high top Converse, and the cutest, tiniest Air Jordan’s, and hand-knit baby booties, glued toe to heal. They completely cover the walls of the chapel, and the sides of the altar.

At first I feared that they were sent in to memorialize a child who had died, but I discovered that each pair represented a living child, sent in by its parents or godparents after having outgrown them, and were offered to the Holy Child, the Santo Niño, in gratefulness for his gifts to us. “How beautiful upon the mountain are the feet” of the children who have worn those shoes, and who are growing up now to stand on holy ground, to announce peace, to bring good news, to remind all of us who visit the shrine, “Your God reigns! (Isaiah 52:7-10.)”

Do you suppose that all this time, God has been using the dust on the planet to make everything holy? That God has been blowing through the stardust here to sanctify not just that family in Bethlehem, but every one of us, calling us all Holy Men and Holy Women? Could it be that God has all along been stirring up the dust on which we walk, to shine blessing and hope into every breath we take? Calling our dusty, tired feet, beautiful?

Since the beginning, God has been creating us in holiness, full of grace and truth, that we might perceive the glory of God, not only in the Christ Child, but in the face of every other beloved, sacred child of God. All of us, always standing on holy ground.

That would really be a miracle worth celebrating. Merry Christmas.