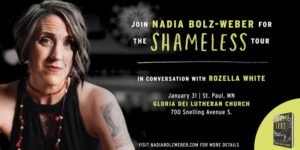 On January 31th, 2019, at 7 PM, Nadia Bolz-Weber is coming to Gloria Dei Lutheran Church to share from her new and most personal book Shameless: A Sexual Reformation (Convergent, Hardcover, January 29, 2019).

In her latest release, Bolz-Weber is out to slay a giant by going after the church’s teachings on human sexuality. She deftly weaves narrative, history, scripture, and wit together to show how Christianity has so often turned the glorious gift of our bodies into something ugly and shameful, telling us that true holiness equates to sexual repression— “as if the God of the Universe had programmed into creation a passive-aggressive test of our willpower.”

Join Nadia for a lively evening of truth-telling, conversation, humor, healing and maybe a short dance party as she proposes “…a sexual reformation for those who have been hurt…for those who have done the hurting…and for those who are certain they know all there is to know about what God thinks of sex.” Also on stage for a conversation with Nadia will be Rozella White.

NADIA BOLZ-WEBER first hit the New York Times bestseller list with her 2013 memoir—the bitingly honest and inspiring Pastrix, followed by the critically acclaimed New York Times bestseller Accidental Saints (2015). A former stand-up comic and recovering alcoholic, Bolz-Weber is the founder and former pastor of a Lutheran congregation in Denver, House for All Sinners and Saints. She speaks at colleges and conferences around the globe and has been featured in BBC World Service, the Washington Post, Bitch magazine, NPR’s Morning Edition, Fresh Air, More magazine, The Daily Beast, and more.

The event at Gloria Dei on January 31 is sold out.

Proceeds are divided between the hosting parish, a charitable cause of the host parish’s choosing, the tour organizer, the special guest, and Nadia.