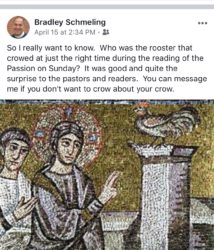 I had a wonderful Easter dinner today with Jerry and Val Vagts, dear friends of mine, and Cathy Jenny. Val, Cathy and I went out to Oregon a few years ago to swim across the Columbia River and became good friends on the journey. We let Jerry be an honorary member of We Three.

After dinner we decided to play a card game. We were engrossed in it, but I finally said, “I really want to tell you about something when we take a break.” Of course that set off another kind of brake, and I told my story.

You know how much I depend on and credit the Holy Spirit for guidance and active involvement in my daily life, how she has even saved my life. Now, for the first time ever, I have experienced a strong nudging that I whole-heartedly resisted. ‘No, I really don’t want to,” I said. My excuse was that maybe the thought was not from Spirit, but instead was my own idea and not a good one.

It was early Palm Sunday at Nativity Lutheran in St. Anthony. I was enjoying their dramatization of the Passion story and the wonder of adults who worked at memorization and acting without scripts. In my churches I never asked for more than reading their assigned lines, all sitting on bar stools with scripts in their hands. Then I just knew, and I was correct, that the narrator would read the part about the cock crowing. When I shook hands with the pastor following the service he commented that they were going to tape a rooster’s crow, but hadn’t gotten it done. I could have done that. I should have done something. But my minor regret was more relief than guilt, as I drifted into conversation with someone else before I headed over to Gloria Dei.

Like trying to submerge a ball in a pool of water, I found the topic on my mind the entire 20 minute trip as I tried to figure out what was happening—not the first time I had a dialogue going in my mind about very small things, instead of immigrants or justice or homelessness.

What is this? Why would this thing be brought to my attention? Was there someone in the congregation who needed to hear the rooster crow to bring to light his own journey? And it didn’t happen?

When I was an active pastor the crowing was always my line. The sound surprised everyone, even if they had heard it before, creeping up on us all until Wham! And we were hit by the story becoming our own. But I could not have done that today, unexpected, in a small, contained sanctuary. It’s too loud. I’m not a member. It would have been an unwarranted intrusion. I would have become the subject instead of Peter’s betrayal. Sorry, Spirit. I’m glad I didn’t raise my voice.

I hurried to get off 280, merge onto 94, and quickly scoot across three lanes to reach the exit to Snelling in time. The ball bounced back into view.

Next year I’ll let the pastors know I could become the early bird—even demonstrate if they want to hear my crow. How’s that, Spirit? No intrusion. Approval ahead of time. Unless not, but the church would be in control, not I.

Then again, would they realize the impact on the listeners? Would they understand how much easier it is for Peter to act his part when he’s reacting to Jesus’ prophecy being fulfilled instead of a narrator’s words?

I parked my Honda and entered Gloria Dei, realizing I’d think about this again next year. I joined the others gathered for the entrance and headed for the front to slip into a pew with a place for a single person, and sat back.

What! They’re doing a dramatization here, too? No, I really don’t want to. Maybe someone is already assigned to crow. Next year, I promise. What? I have to stop protesting or I’ll miss my second chance? Imagine how I will feel afterward if I miss the moment? But I haven’t practiced!

And Jerry said, “I just read about that on Facebook!”