Five years ago, four young adult members went to the pastors at Gloria Dei and asked to form a ministry for young people like them. Often caught between being a youth and having school-aged children, young adults exist within the church and serve in many capacities but can feel like they lack a clear peer community.

“I saw a lot of other young adults in church on Sundays and was curious about how to connect with them outside of sanctuary doors,” says Chloe Ahlf, one of the group’s founding members. Together, with the pastors’ blessings, the four founding organizers formed the 20-Somethings/30-Somethings Young Adults Group. The group invites young adults to gather and form community outside of worship. Meeting the second Tuesday of every month, the group rotates among different restaurants in the Twin Cities and also gathers for occasional volunteer opportunities or to study scripture in-between services. 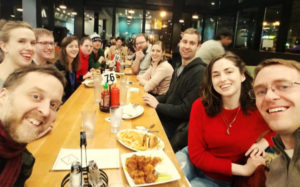 “I am so grateful to have this group,” says Meredith Pain, one of the founding members. “The second Tuesday of the month happy hour is such a bright spot in my month.”

Rosa Prigan has been a part of the Young Adults Group since August, when she started attending worship at Gloria Dei. “I was interested in the group because when I moved to St. Paul, I didn’t know anyone,” she says. “I wanted to make friends outside of work who were like-minded.” The first gathering Rosa came to was a potluck at Pastor Javen’s house, and she has been coming both to the group and to church ever since.

Jake Seamans has had a similar experience. “It’s been great to meet other young adults and to know that Gloria Dei makes it a priority to have young people connect with each other,” he says. Jake has been joining the 20s-Somethings/30-Somethings for more than a year. His connections in the group have led him to become more involved in other church ministries, too. For many, like Jake, the Young Adults Group has been a point of entry into fuller life in the congregation. For others, it’s led to a more vibrant faith life and deeper connections at Gloria Dei.

Megan Henry has been a member of Gloria Dei for many years and is one of the founding members of the Young Adults Group. “It’s so nice to connect with other members in their 20’s and 30’s because I know there will be a friendly face at church the next Sunday,” she says.

With each gathering, the same things hold true among the young adults present: lots of laughter; an excitement to get to know one another; genuine concern when sharing in one another’s troubles; and a deep gratitude for the God that pulls us all together from the busy corners of our young adult lives.

“Being a part of this group has bridged my faith from adolescence to adulthood,” says Rachel Manz, another founding member. “The community and friendships I have gained will last a lifetime.”

Anyone who considers themself a young adult is welcome to join! The next gathering of the 20-Somethings/30-Somethings will be March 12, from 6-8pm, at the Naughty Greek (2400 University Ave W, St. Paul). To join our mailing list, shoot us an email at 20s-30s@gloriadeistpaul.org.